For a limited time, buy any set of armor plates, get a FREE Plate Carrier. USE Code: FreeCarrier at checkout. 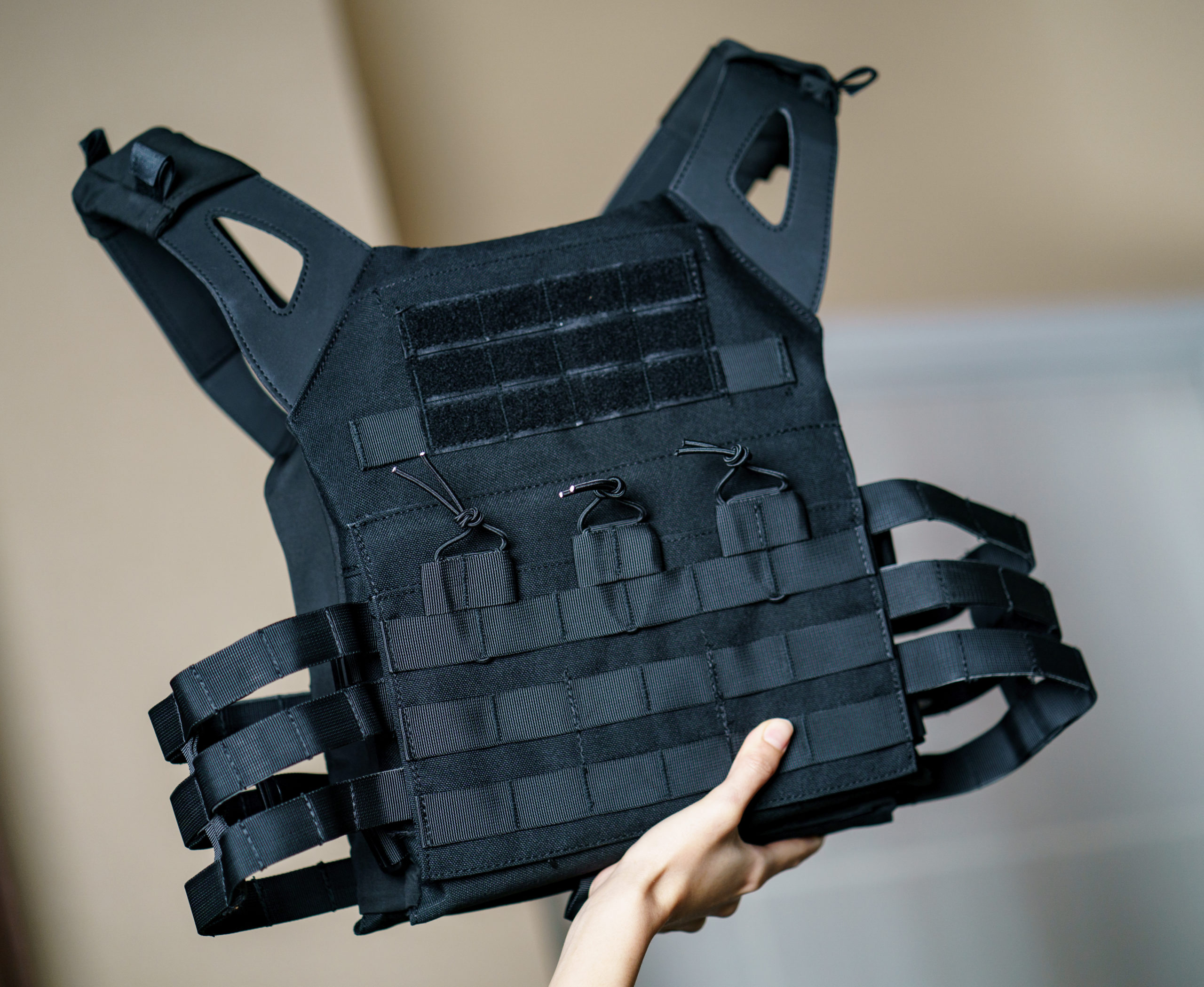 Body armor. It’s been around since mankind learned to use leather straps to protect ourselves against the world’s dangers. Thankfully, body armor has advanced quite a bit over the centuries. Now we have wonderful things like plate carriers to ward off the wiles of the enemy.

This is your ultimate guide to plate carriers. Whether you’re a newbie looking to educate yourself more, or a current owner in need of some more tips and tricks, we’ve got you covered in this guide. Let’s dive in.

An Introduction to Plate Carriers

There’s a lot of confusion out there, so let’s ensure we’re on the same page. This section gives you an overview of what the heck plate carriers are, the different types, and more.

What Is a Plate Carrier?

When people imagine body armor, they typically conjure images of bulletproof vests, guns, and the like.

Body armor is a general term that refers to anything that protects your body from harm, generally ballistic harm. Bulletproof vests are the most common form of body armor, and plate carriers are simply one type of bulletproof vest.

As the name implies, plate carriers contain ballistic plates that stop bullets and are mainly used as protection against rifle fire. The carriers have pockets that enable you to swap out the plates whenever necessary. They have numerous pouches, compartments, and areas to attach your tactical gear to, called Modular Lightweight Load-Carrying Equipment or MOLLE (pronounced like the name Molly).

Aside from the pockets and the interchangeable plates (not included with plate carrier purchase), they sometimes come with a cummerbund.

These allow you to adjust the ride of the plate carrier a bit, but also offer additional space to carry your tactical gear — which saves you valuable time should you find yourself in a precarious situation.

Because you can swap out different plates — depending on the size of your carrier — carriers allow you to use the same vest for multiple situations and utilize whichever plate fits the occasion. Keep in mind though, that without the plates, the vest loses almost all of its protection.

Because plates are typically used to defend against rifle fire, plate carriers are customarily used by military and law enforcement — or civilians serious about their body armor! Their primary purpose is for protection, not to impress your buddies (but they will be impressed).

What Are the Different Types of Plate Carriers?

It’s meant to conceal under your clothes, so it’s as minimalistic as you can get. It’s a soft fabric that contains the plate and nothing else (or very little). Again, the intent is to use this when you don’t want others to know you’re wearing body armor. Many slick plate carriers weigh less than a pound (without the plate).

How Do You Maintain A Plate Carrier?

Just like any type of tactical gear, the better you maintain it, the longer it lasts. Plate carriers are no exception, but it’s not complicated. The manufacturer will have instructions on what to do and what NOT to do — you don’t want to damage your plate or void any accompanying warranty.

Generally speaking, here are the basics to maintaining your carrier.

What Else Should I Put On My Plate Carrier?

Unless you get a slick plate carrier, you’ll have ample room to take anywhere from 10 to 40 pounds of gear with you, so what else should you/can you take? Here’s a list of items for you to consider if you’re new to the game:

How to Choose A Plate Carrier

Choosing the appropriate carrier for your needs and build is mission-critical. The long and short of it is that you need a carrier that’s large enough to carry your plate. If you have a plate already, purchase a carrier that fits your plate.

The plate manufacturer will/should have specifications on which carriers of theirs fit your plate, but if you want a different brand, just make sure they are made to carry your size and style plate.

If you do not have a plate, buy that first, then get a carrier that holds it. Sizing options vary by material and company, but there are generally four different sizes of armor plates.

To ensure you get the right size plate, measure your torso from nipple to nipple and then from the top of the breast bone to a couple of inches above your belly button (at or below your ribcage). The plate should rest just inside your nipples horizontally, and cover your breastbone down to your mid-stomach region below your ribcage vertically.

Again, it must cover your heart, lungs, kidneys, and liver.

Do You Need To Buy Side Plates As Well?

It comes down to the amount of danger you’re going to be in and the amount of protection you need/want. Side plates — as the name suggests — protect your sides. Regular plate carriers cover your front and back, the widest, largest, and most susceptible areas of your body.

If we’re talking full combat guarding a convoy, then ya, you probably want to consider side plates, so your entire torso area is protected. Just remember, that’s more weight you’re going to lug around, which means it’s going to be less mobile and slower. If you need to be agile and mobile, side plates are not the way to go.

Also, If you’re a civilian and are getting a plate carrier just in case — you know, something bad happens — then you probably don’t need to spend your money on side plates.

What is The Best Plate Carrier?

If you want to bring some more items along with you — like a canteen, extra magazines, flashlight, etc., — then the minimalist or even medium will suit you better. Unless you’re going to serve our great country in the military, the heavy will be a bit overkill.

Pros and Cons of Plate Carriers

Like everything, there are advantages and downsides to plate carriers. Here are the top pros and cons to consider.

What Are Bulletproof Vests?

As the name implies, a bulletproof vest is a tactical, soft-body armor vest that protects against bullets — to a degree. They also offer good protection against knives and other blunt objects (like bats), but bones can still break if you’re hit hard enough.

Some bulletproof vests have pockets that allow you to slip in a plate for added protection, but most do not.

Bulletproof vests are made of strong, durable, and high-tensile materials like Kevlar, that offer protection against low caliber bullets from pistols and handguns. On their own, they can stop bullets like 9mm, .40 caliber, .357 Magnum, and even a .44 Magnum, depending on the level of protection of the vest defined by the National Institute of Justice (NIJ). Here’s the scale:

Which One Should You Get? Bulletproof Vest or Plate Carrier?

Deciding between a bulletproof vest and a plate carrier ultimately comes down to your desired level of protection and concealability. Plate carriers offer the most protection, bar none, and if you want to conceal your plate, the slick plate carrier may be the way to go.

But since most murders are committed using handguns, the average civilian will benefit from a bulletproof vest. Plus, without a plate, bulletproof vests are lightweight and feel almost like regular vests.

What are Tactical Plate Carriers?

Which Plate Carriers Do Police Use?

There’s no clear-cut answer to this because what a beat cop will have on hand will differ from what the SWAT team uses. Most police officers do not routinely wear plate carriers — they’ll wear level II or III-A bulletproof vests.

SWAT, on the other hand, may very well use plate carriers since they deal with the most dangerous situations.

How Much Do Plate Carriers Weigh?

The carriers themselves weigh anywhere from 12 ounces to a few pounds depending on the size you get. But, once you add the plate and any gear that you want to attach, they can weigh upwards of 35+ pounds.

What Are Plates and Plate Carriers Made of?

Plates are generally made of polyethylene, steel, or ceramic. Sometimes you’ll find one that’s a mix of two. Steel has been the go-to for years and years, but ceramic is gaining popularity because it’s a bit lighter. Polyethylene, specifically Ultra-high-molecular-weight polyethylene (UHMWPE), is the lightest of them all and just as protective, but they’re also the most expensive.

Plate carriers can be made out of various materials, from your generic cotton/polyester blend to tear-resistant fabric like Kevlar, or even 500D nylon. You’ll want one that’s made from durable fabric like 500D nylon or Kevlar.

Is it Easy To Move In a Plate Carrier?

If you get a slick plate carrier, movement is not a problem. They’re light, concealable, and don’t constrict movement. From there, the larger of a carrier you buy and the more gear you take, the harder it will be to maintain regular movement.

The best way to minimize (or eliminate) any difference in movement is to train with your plate carrier, loaded down with all the gear you’ll normally take with you. The more you use it, the easier it will become to maneuver with it.

If you’re looking to up your body armor game, it is highly recommended to get a plate and plate carrier. They offer more protection than a traditional bulletproof vest, they come in a variety of sizes and enable you to take more gear with you, eliminating the need for a backpack or other type of pouch.

Alabama
Alabama does not have any additional body armor laws. In Alabama, any civilian can purchase and use body armor,

How to Choose the Right Size Plates for Your Armor System

So, you are interested in purchasing hard armor plates to upgrade your loadout. You have selected the necessary threat

When shopping for personal protection, you should never wonder about the legitimacy of the body armor you are purchasing.

Does Body Armor Have an Expiration Date?

People in many professions and vocations wear body armor while on duty. Others store gear in their homes for use in an emergency. For a limited time

Buy Any Set of Armor Plates

Get a FREE Plate Carrier